We're doing something a little different this time. Two of us have watched the show independently and will be discussing it together in this article!

Desch: I despised the first part of this episode. It just radiated extreme incel energy to me.

Puddi: Oh, same. It was nigh unwatchable for me. I think we have some thoughts about this first episode of Rent-A-Girlfriend, but let’s get to those momentarily. You'll need a bit of context to understand some of the pain points.

Desch: Rent-A-Girlfriend centers around Kazuya, a young college student very much in love with his girlfriend… who pretty much immediately dumps him. In his dark, messy room, at the height of his anguish, Kazuya decides to download a “rental girlfriend” app (hence the name, Rent-A-Girlfriend) and hire someone to go on a date with him. He pairs with Chizuru, a beautiful woman who's slightly younger than him. The date is a little awkward, and his emotions are clearly still in turmoil. Kazuya ends up getting upset with Chizuru for being phony, and they begin to fight. Right as things get really heated, there's a bit of a twist, and the premise for the rest of the show (and series, I imagine) is set up. It takes a while to get to that hook, but it's a fun one.

Puddi: The show’s setting itself up to be a nest of lies and cover-ups, with the characters already spinning said web at the end of the first episode. This is a tried and true technique from other rom-coms like Nisekoi: False Love, but Rent-A-Girlfriend tries to separate itself with a bit more adult subject matter. This is a double-edged sword, however. Sure, it does open the door for more complex character development and interactions, but so far, it doesn’t seem like Rent-A-Girlfriend is going to be utilizing that very well. Instead, it's relied on characters making predictable lies with predictable comedic timing, just with more smutty content.

Desch: Which brings us back to the first part of the episode. Like I mentioned earlier, seven minutes into the show, I was left with an overwhelming feeling of what I can only describe as disgust. It was tough to watch, and honestly there was a point I considered just stopping and dropping the show. Once I made it halfway through the episode, though, things started to improve significantly. I can't say that it was enough to save Rent-A-Girlfriend, but it was enough to get me to watch the next episode.‌

Puddi: Yeah, strong agree. Rent-A-Girlfriend has its moments, but boy does the first half of the first episode suck. Depending on your tolerance for “anime plot nonsense” (and also “anime sexual overtones”), it might be impossible to get through.

Desch: The beginning half of the show is pretty much the cookie cutter “loveless trash” anime cliche, and it’s unfortunate. Given some of the character buildup at the latter half of the episode, I believe there are much stronger openings that could have been explored that create a more relatable main character. I’m not sure why we need to have (yet another) anime series start off with a main character who is angry at a woman. And honestly, so far in the first episode, there isn’t quite a strong reason for it. Instead of hiring someone to go out with him out of despair from being dumped, why not have him use the date as an opportunity to practice for the “real deal” in good faith? That way, you're still presenting a character lacking in self-esteem with room for character growth, but Kazuya’s introduction is healthier.

Puddi: The problem is, I think the latter half of the episode is pretty good. Sure, it still has unfortunate moments where the comedy and situations are forced, but it’s miles better than the first half, and ends on an interesting cliffhanger for the rest of the show.

Desch: Yeah, completely agree. The second half I enjoyed!

Puddi: On a more technical level, this might be the first time I've heard what feels like binaural audio (or maybe just well-mixed stereo audio) during one of the scenes. Watching this episode with headphones on is a trip.

Desch: The animation seems caught between two styles. There are some segments that are excellent and some that just seem a little off. I'm curious what ends up happening in later episodes, but the characters are really well detailed in close-ups, while the wider environment shots have a bit of a cheaper feel to them.

Puddi: The animation is something I actually enjoyed! There’s a lot of good reaction faces and comedic styles to highlight punchlines. I don’t know how much of this is from the source material, but it seems like the animation studio is getting a lot of flexibility and freedom to bring the characters to life. You’ve also got an all-star cast of voice talent working on the show, even if having Sora Amamiya saying “Kazuya” is a bit too reminiscent of some wonderful worlds out there.

Desch: I do want to make a quick note of the typesetting. I admittedly haven't been watching many recent shows, so this might not be that new of a trend, but I was glad to see Crunchyroll doing some basic styling for signs. Matching colors, trying to match perspectives, and all that. It isn't quite the level you'd hope yet, considering the resources they have at hand, but it's a commendable step up from what I have seen before.‌

Desch: 🤔 Depends on how the next episode or two goes. I'm planning on giving it the three episode test.

Puddi: The worst is behind us, right? It can only get better from here… I hope. 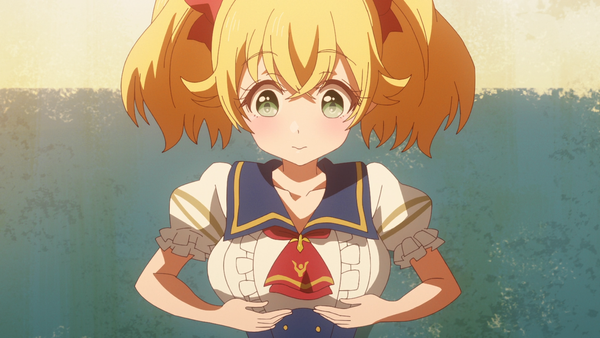 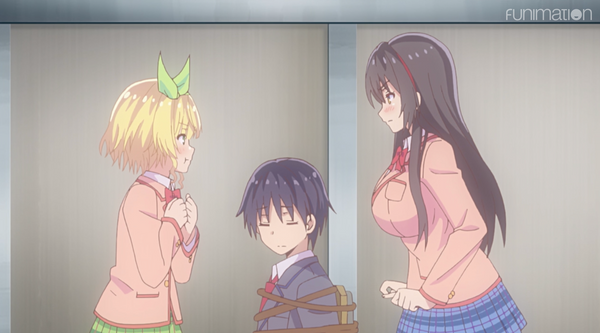