Because even Gundam can have thicc thighs.

So it's been about a month six months since my last Gundam review. You may be asking what I've been doing with my time, since it clearly wasn't spent on trying to pump out articles about the newly airing seasonal anime. Fret not, for I have been immersing myself in the oldest of Universal Century Gundam anime in order to build up my knowledge on all things Gundam. Because being a self-professed "Gundam fan" without actually having watched any of the major series just made me feel like a massive fraud. 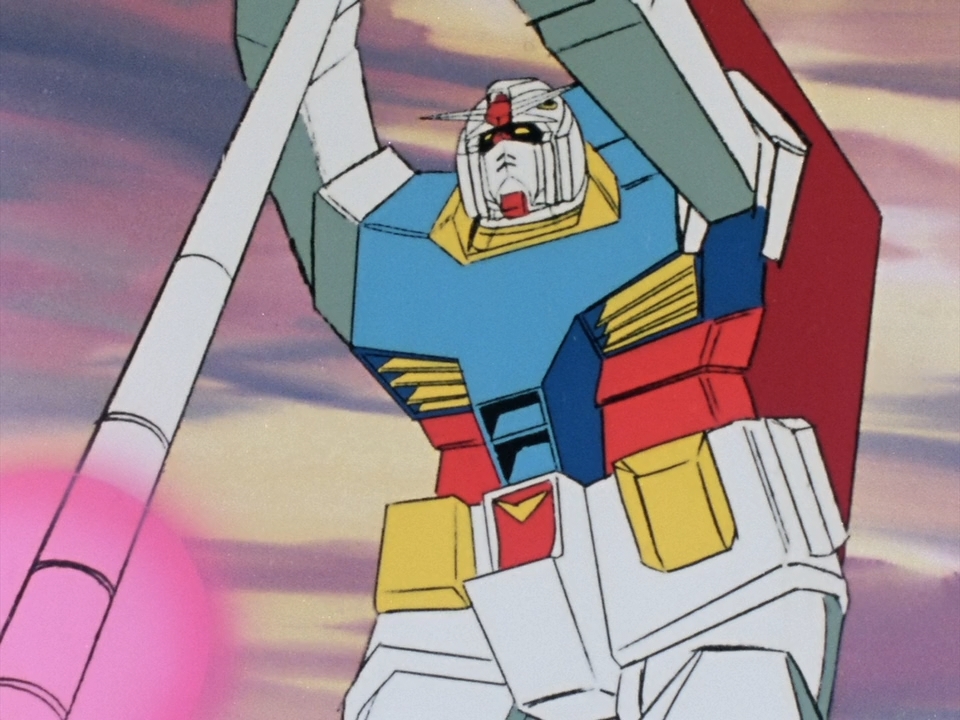 I also hope that by watching the shows, I'll be able to provide some background on whatever gunpla I decide to review. Knowing why a model comes with specific accessories or why it's able to transform into various forms will hopefully be beneficial for the readers who don't give a damn about the anime and just want to build cool model kits. So, without further ado, here's my review of the High Grade Woundwort, a model kit I bought specifically because I thought it looked cool from a series that I'll never be able to read. 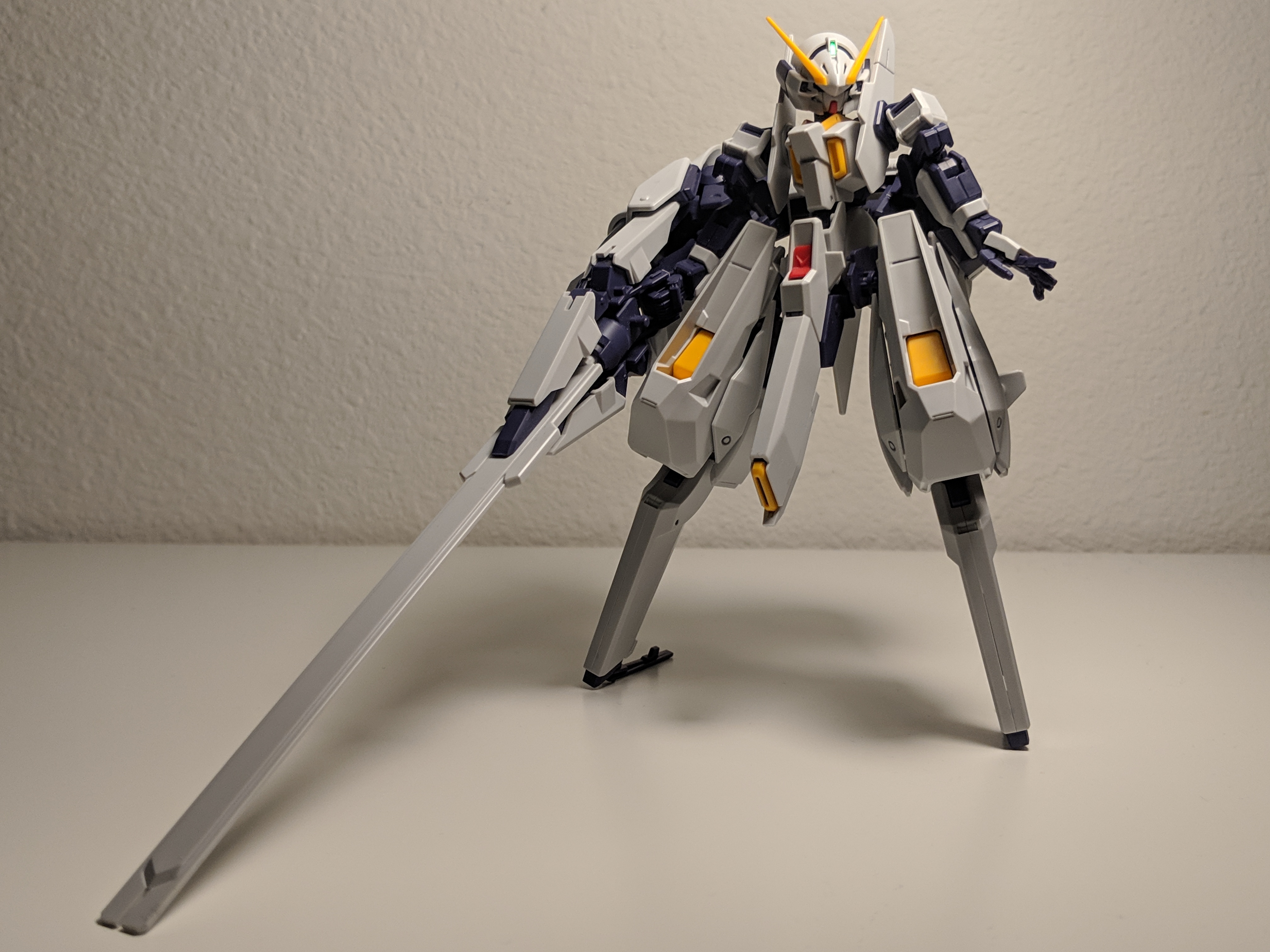 Those books will never be localized and you know it

As stated previously, the only reason I bought this model was because of the thicc thighs its amazing design, which is all thanks to its unique proportions. Most Gundam follow a similar design pattern and therefore tend to have the same basic silhouette: Long legs and a relatively short midsection that mimics a human's shape. The Woundwort, on the other hand, is much more stubby with its chunky legs and slim chest. This gives it a distinct look that no other Gundam model kit even comes close to (don't hold me to that). 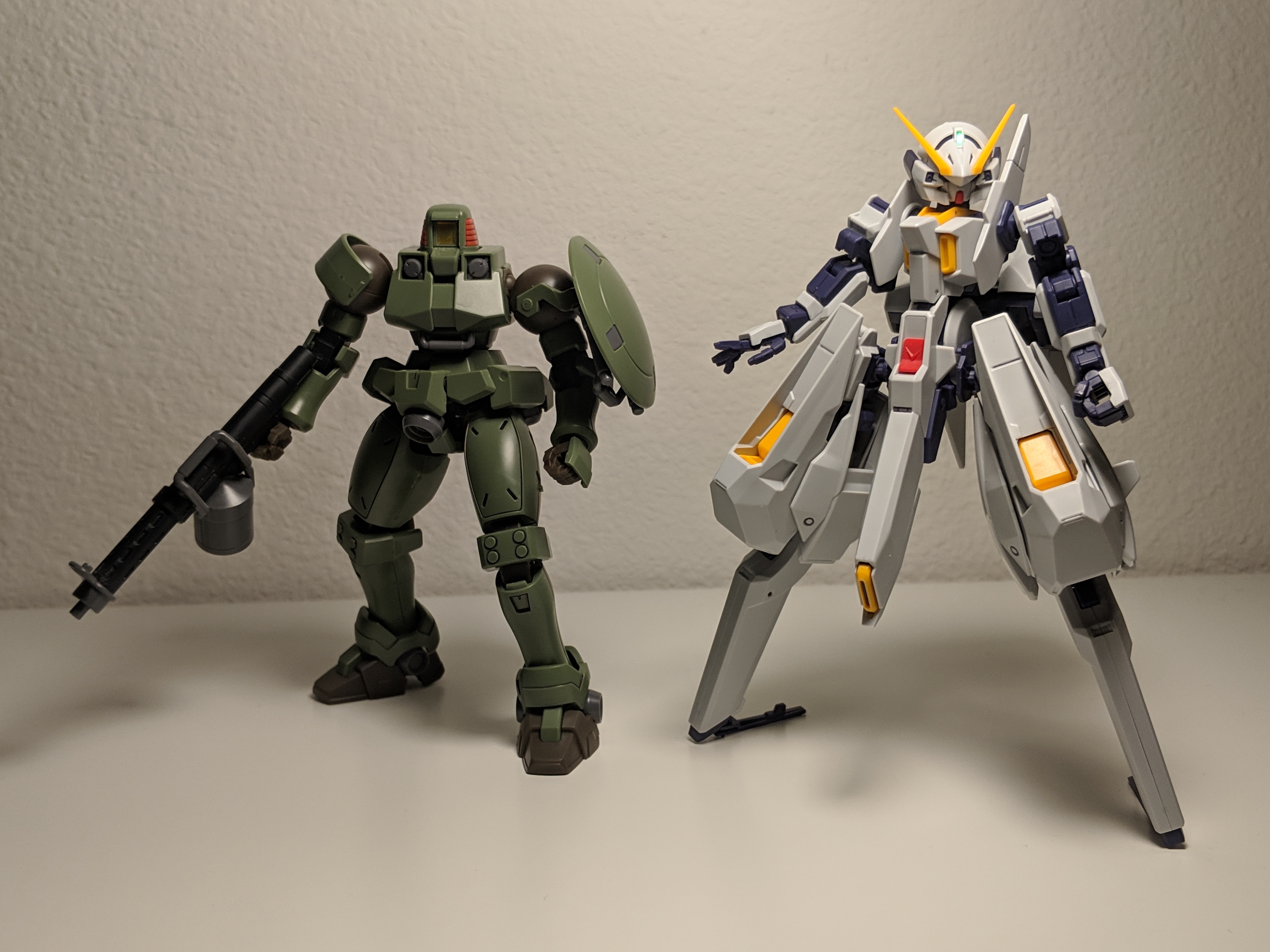 Its unorthodox design also extends to the articulation. The arms have this weird double-jointed elbow, the "feet" can fold up into its legs, and even the crotch-thing can bend forward. This doesn't limit poseability much, as you can still pull off the kinds of poses that all standard Gundam models normally do. It can even stand up on its own. 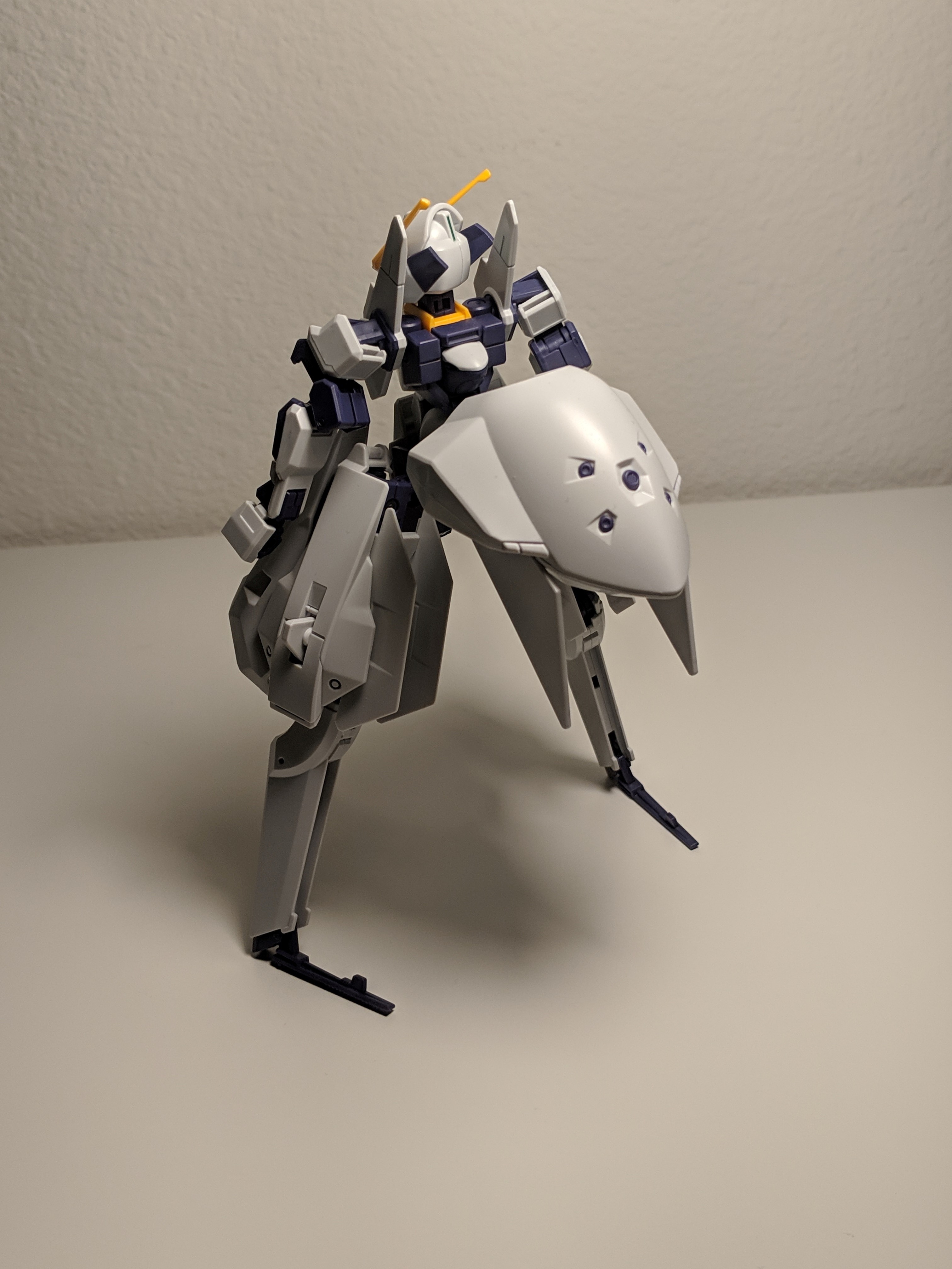 As sturdy as the "feet" are at the moment, I can kind of see them being a problem in the future when the joints get a bit looser. But for now, it's a-okay with me. Maybe don't poke at it too much. And if you do want to display it on a stand, the kit comes with two that you can build on your own. They may not have any fancy-pants features like extending or swiveling, but considering Bandai rarely includes stands with their models, I'm not gonna complain too much. 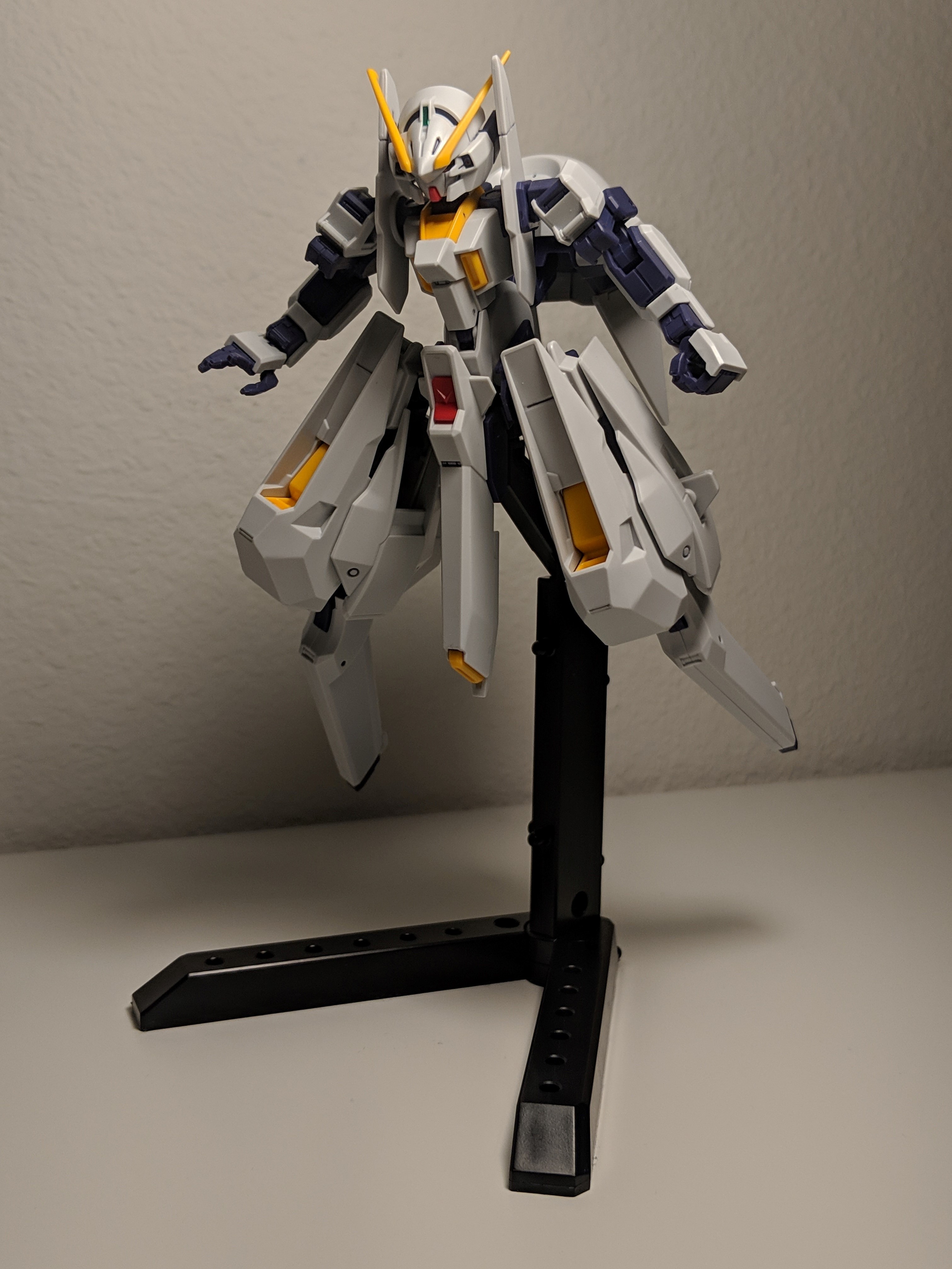 The actual process of building the damn thing is pretty straightforward, just like with most other high grade sets. The runners may not be organized by body part like the HG Leo, but they're small enough so that it won't take that long to locate the piece you need. And because it's a high grade set, you get plenty of polycaps and not one but TWO sheets of stickers. I've elected not to put them on because I like telling myself that I'll just paint them on later. 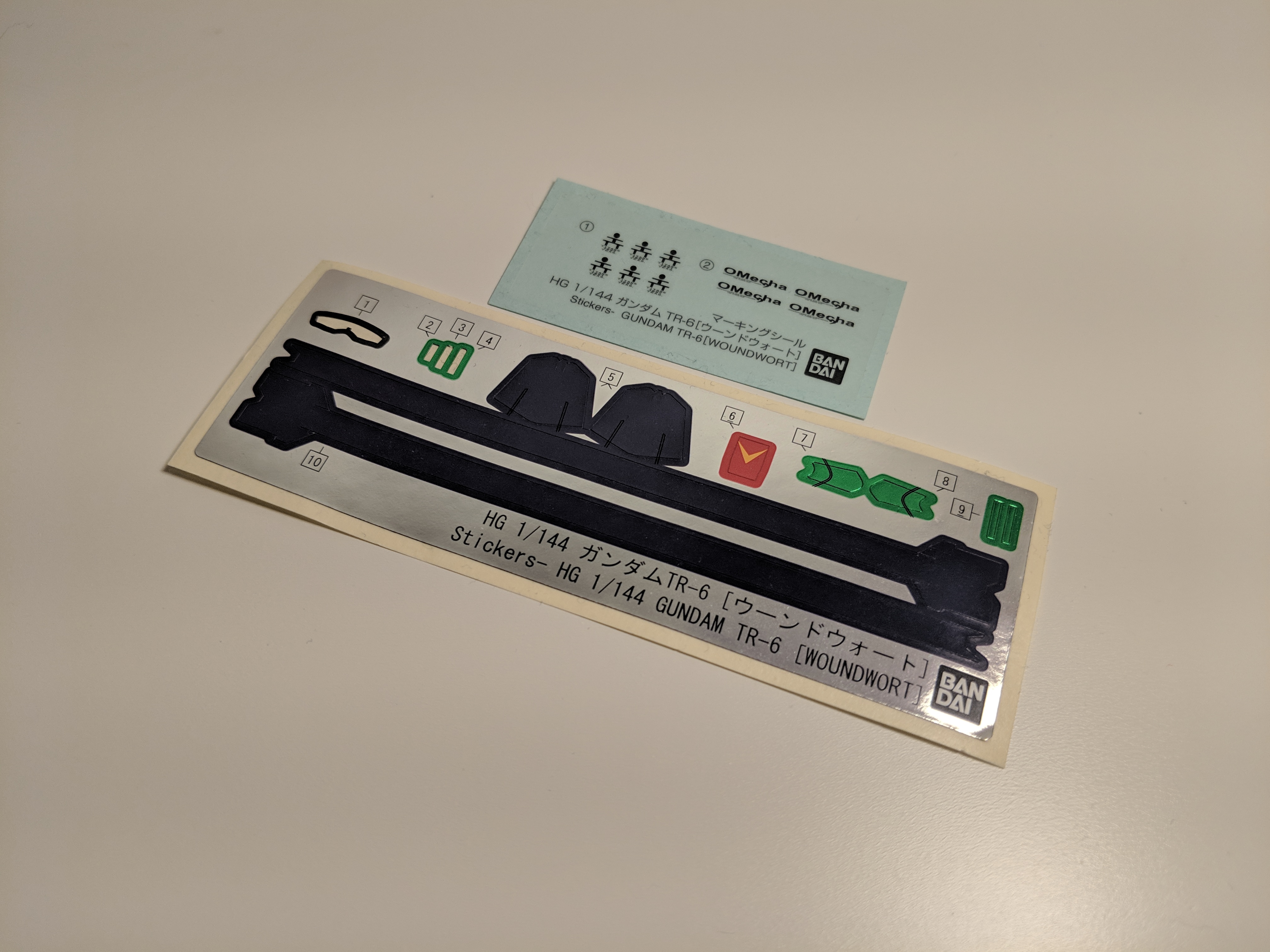 The stickers are there to add some splashes of color to the model, because let's just face it: the color scheme is pretty bland. Large swathes of white broken up by purple joints and yellow protrusions don't make it very aesthetically pleasing. Some shading or painting would probably make it look better, but I don't have the kind of drive to spend an entire Saturday huffing paint fumes in an enclosed space to achieve that. But enough whining about colors and my inability to challenge myself, let's talk about cool things like TRANFORMATIONS and GUNS. 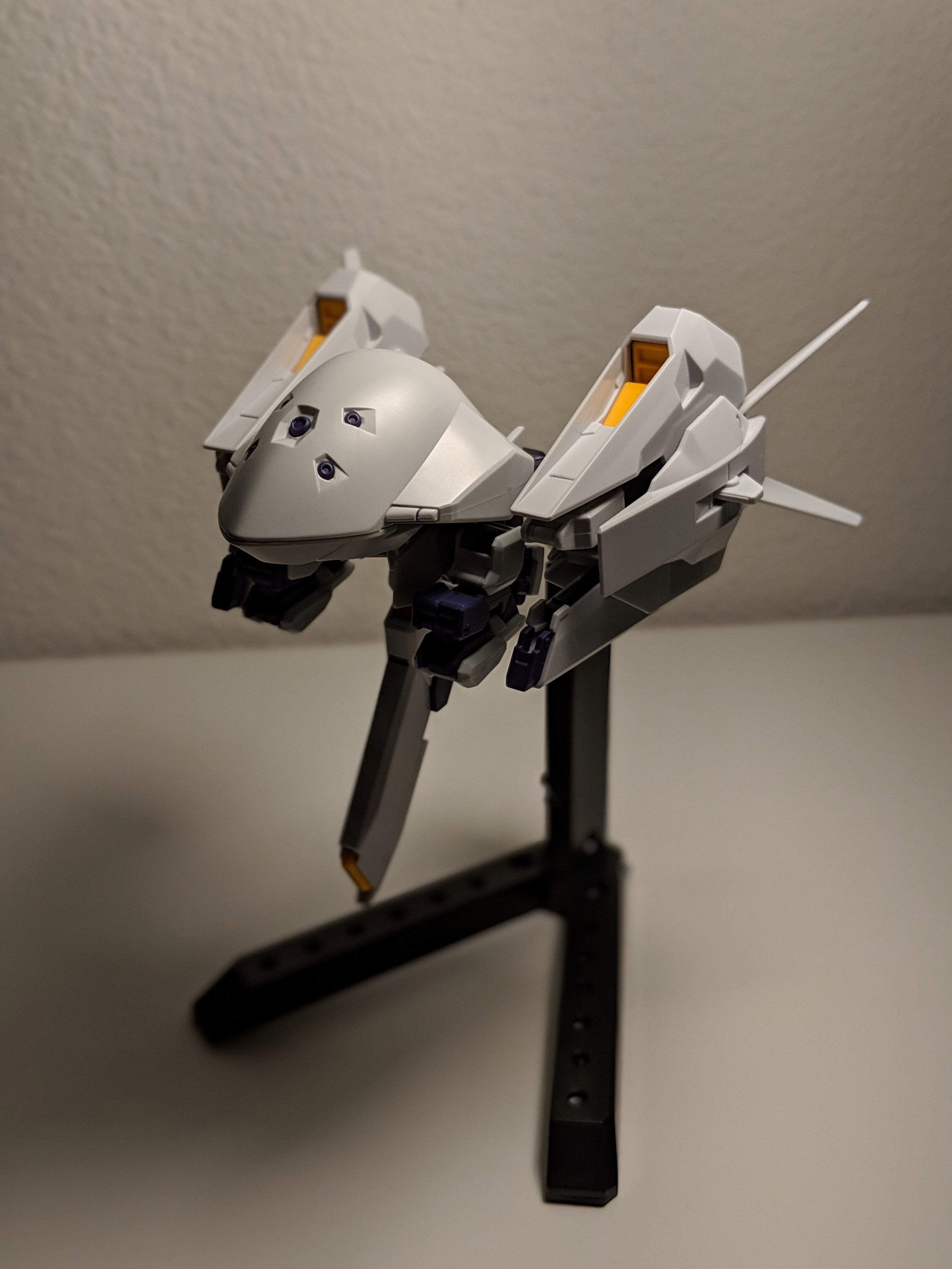 LOOK AT THAT IKARUGA KNOCKOFF

This bad boy can transform into a MOBILE ARMOR. This probably has some sort of grand significance in the manga, but seeing as I haven't read the Japanese textbooks I bought three years ago, I'll never be able to find out. To change it from a gremlin of a Gundam into a bulbous space thing, you basically have to rip its arms and legs off, do a couple of folds, and then jam everything back together. The instructions are easy to follow and the entire process is relatively short, so you don't have to spend half your life moving tiny bits around like in some Transformers toy reviews I've seen. 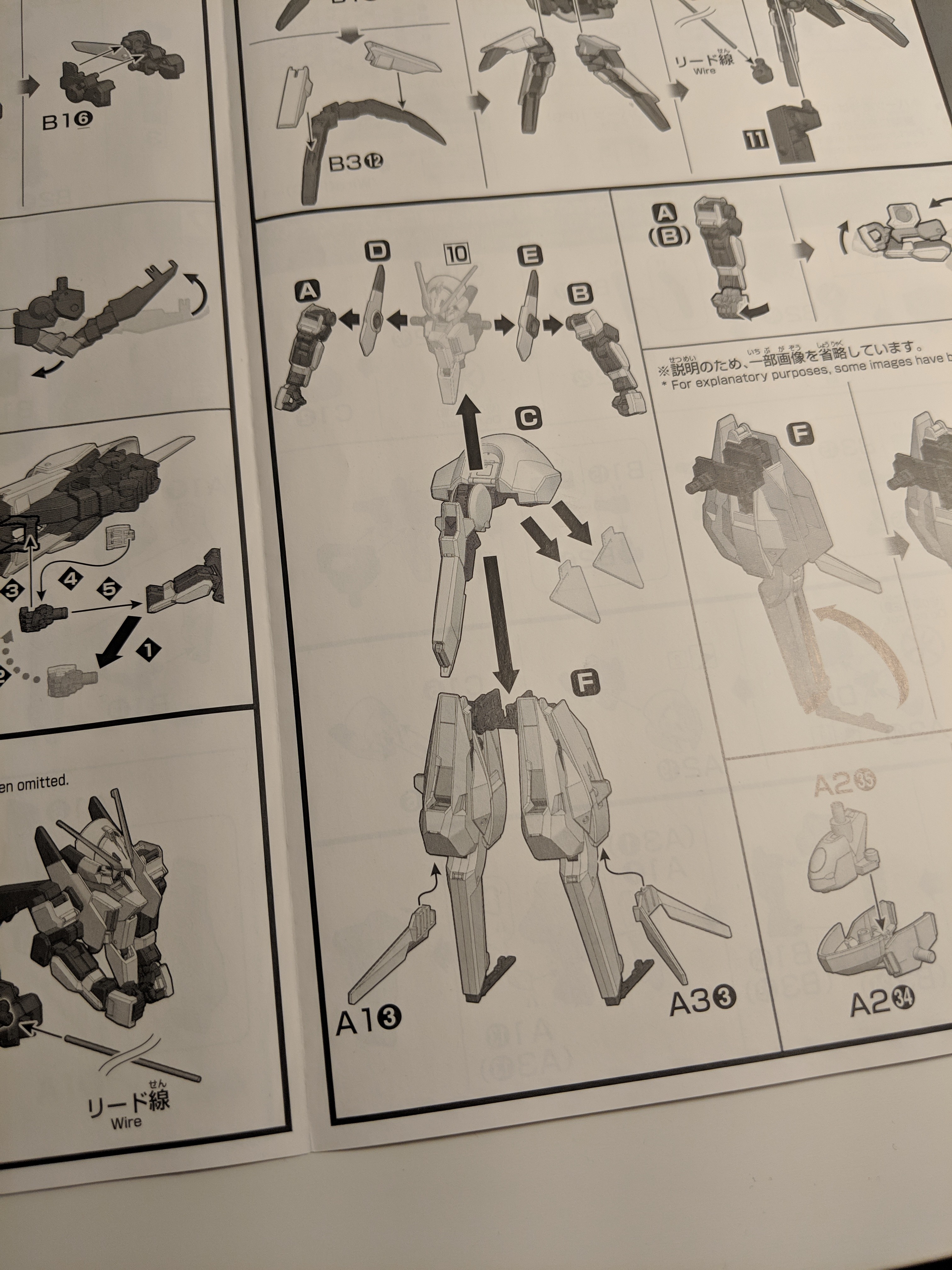 Did I mention that it comes with ACCESSORIES? That's right, you get an extra set of reaching(?) hands and a giant-ass gun that's taller than the model itself. It probably uses it to go spearfishing or something, because it definitely looks more like some sort of medieval lance than a gun. 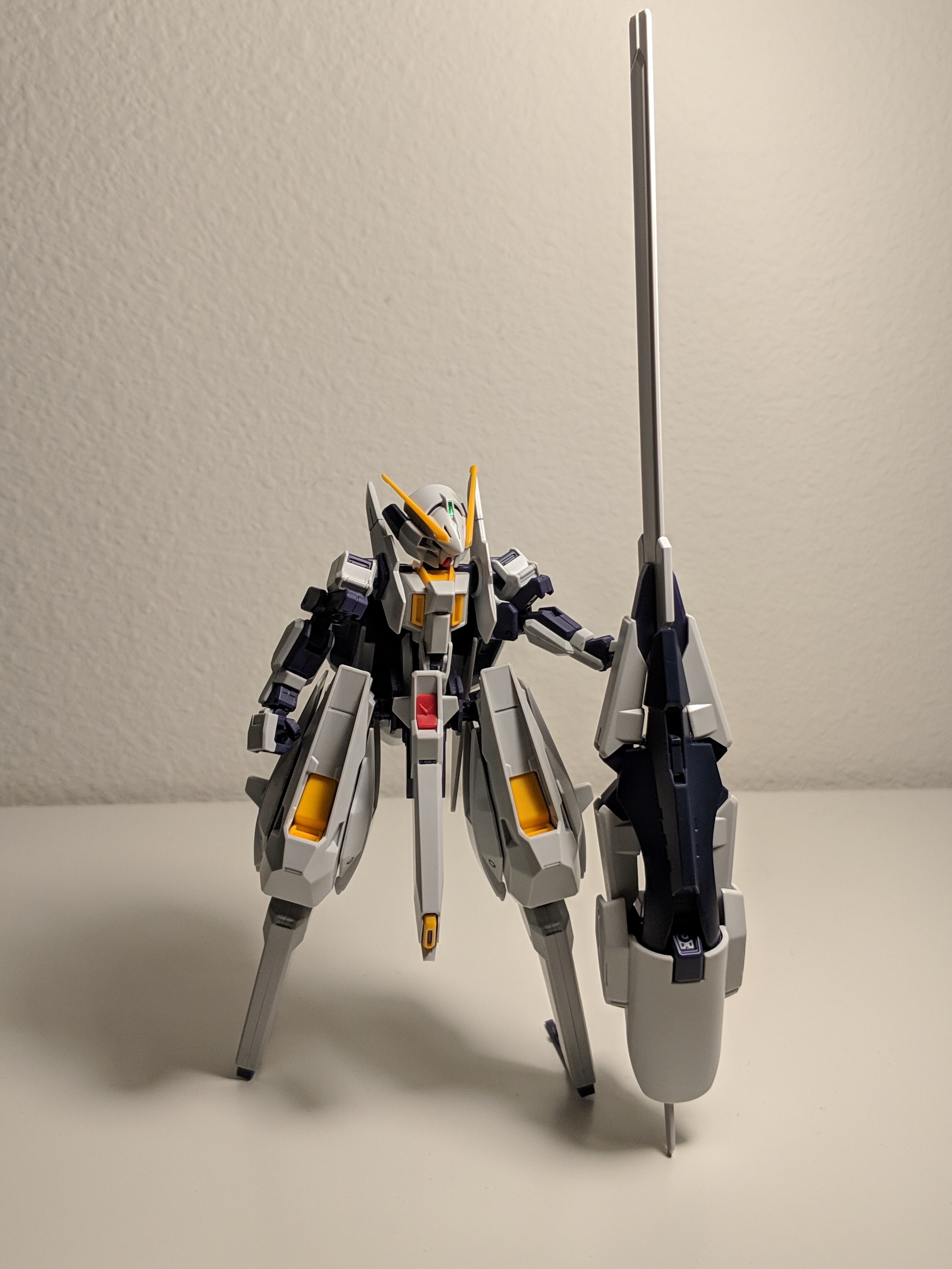 Trying to pose it with the gun is a little bit unwieldy though, and if you don't use the stand, then it becomes more prone to falling over. If you have enough determination and patience though, you can get it into some pretty radical gun poses. 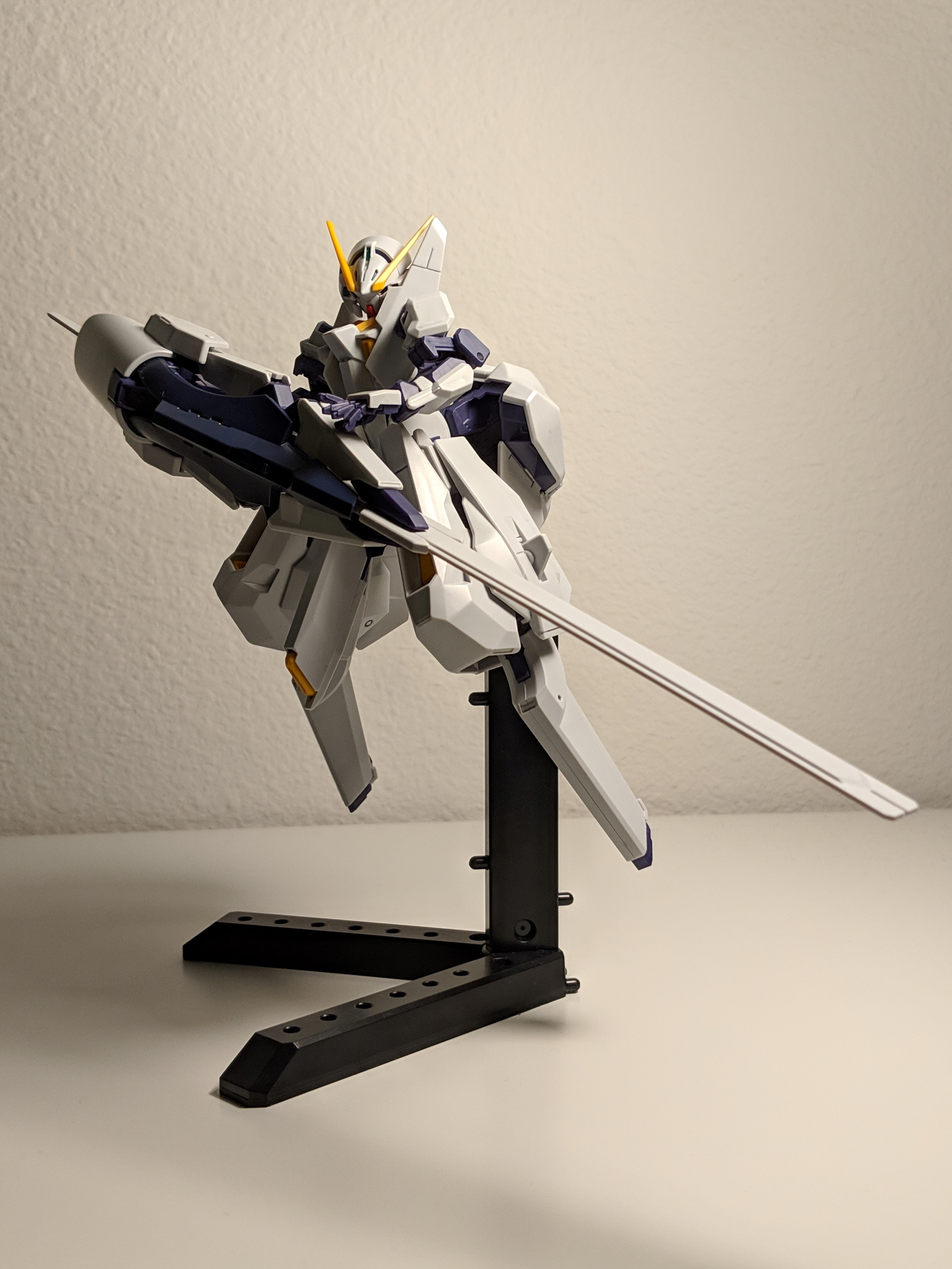 I totally didn't copy this off of a picture from Google Images.

You can also take apart the gun and change it into something the manual calls the "CROW MODE." But I lost one of pieces needed for the transformation, so SORRY NO PICTURES FOR THAT LOL

This is an excellent model that I would recommend to anybody, but due to the unfortunate fact that it's a P-Bandai kit and that it came out like eight months ago, you probably won't be able to find it for a reasonable price anywhere right now. Better hope for a restock.

Pros:
-Relatively straightforward build (no complicated steps)
-Comes with two(!) stands, no need to buy one separately
-Super unique design makes it stand out from other Gundam models
-Articulation is still pretty good despite its unorthodox shape
-Has a mobile armor mode that probably means something in AOZ

Cons:
->P-bandai
-Stickers needed on some parts
-Limited to white and purple with some splashes of yellow and red
-Arms are a little limited in movement
-Posing it with the long gun is a little unwieldy

Verdict: A truly unique build that would stand out in any collection 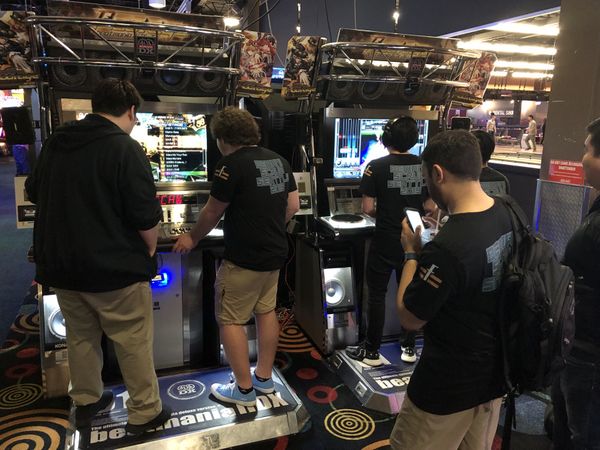 We'll have player retrospectives coming soon, but in the meantime if you missed Bemani Scrub Seattle 2019 you can read updates from the following accounts detailing the tournament. 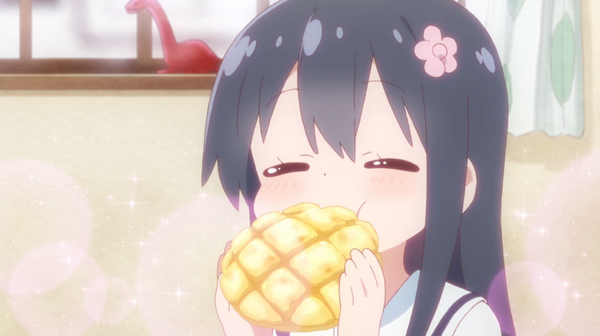 A grown woman is bribing young girls into dressing up for her in exchange for candy. More at 11.