Or: going through my gunpla backlog for the sake of creating more content.

Being a connoisseur of Gundam shows (I've watched all of SD Gundam and like eight episodes of Gundam Wing), I thought I would take it upon myself to review everyone's favorite part of the franchise: the Gundam models. If you're a fan of the multitude of Gundam shows that currently exist, then you probably know by now that for each new series that airs, approximately three thousand different model kits are produced. You may have seen a couple on display at your local Barnes & Noble as you powerwalk to the manga section every weekend. But with such a large selection of kits to choose from, you and your extremely uncoordinated hands might ask yourself if this hobby is worth spending hideous amounts of money on. The answer to that simple, simple question is "of course," and a good starting point is THIS GUY RIGHT HERE. 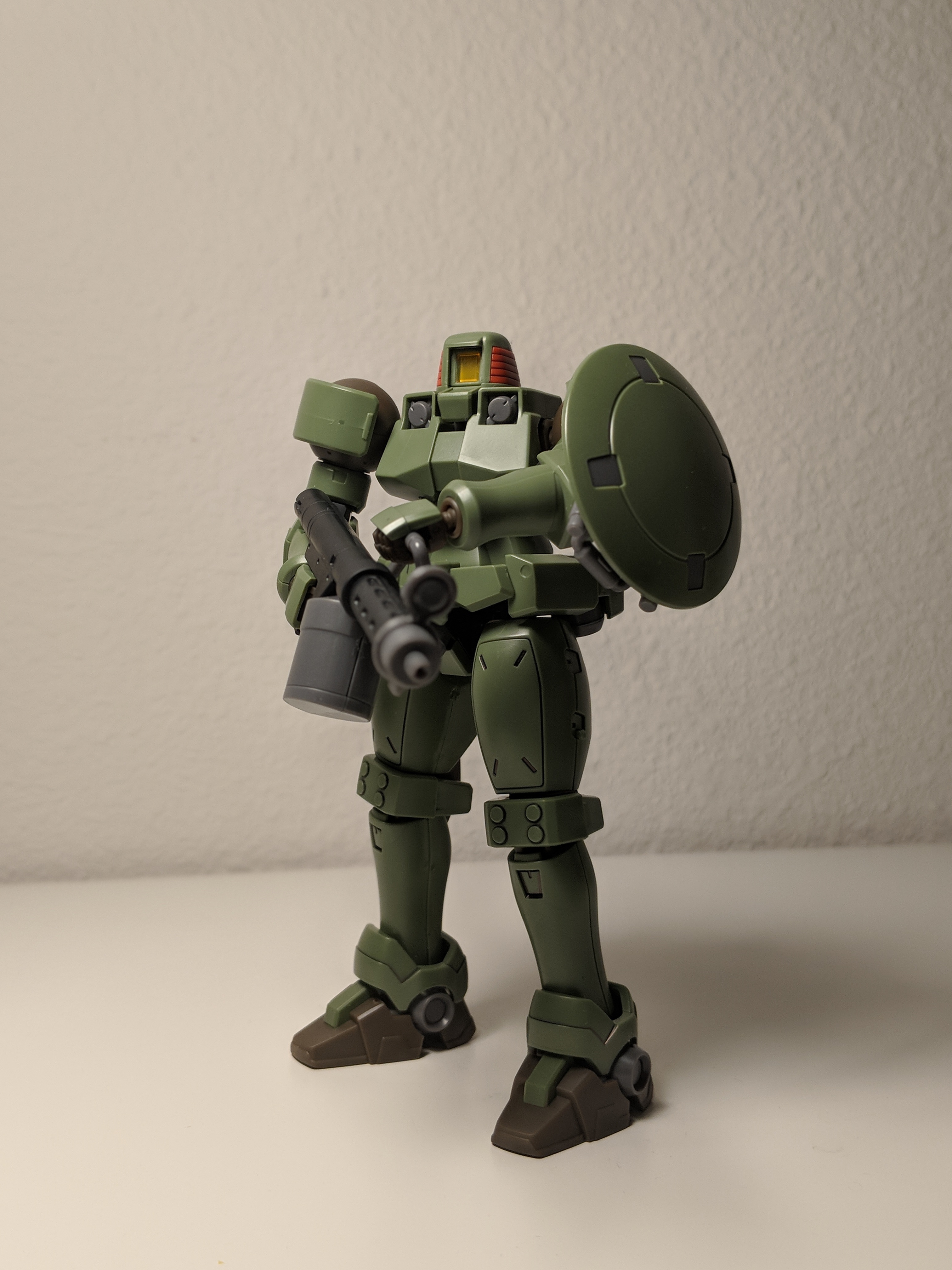 Look at that beautiful grunt suit.

The high grade Leo is perhaps the simplest gunpla model I've ever built in my life (barring my slowly increasing collection of rare petit'gguys). With a grand total of three parts runners and a small set of polycaps, the amount of effort needed to put everything together is rather miniscule. There aren't any tricky steps to throw people off or useless stickers to put on that'll fall off in two years. The instructions even have diagrams that show you which part of the runners you need for each section of the model. 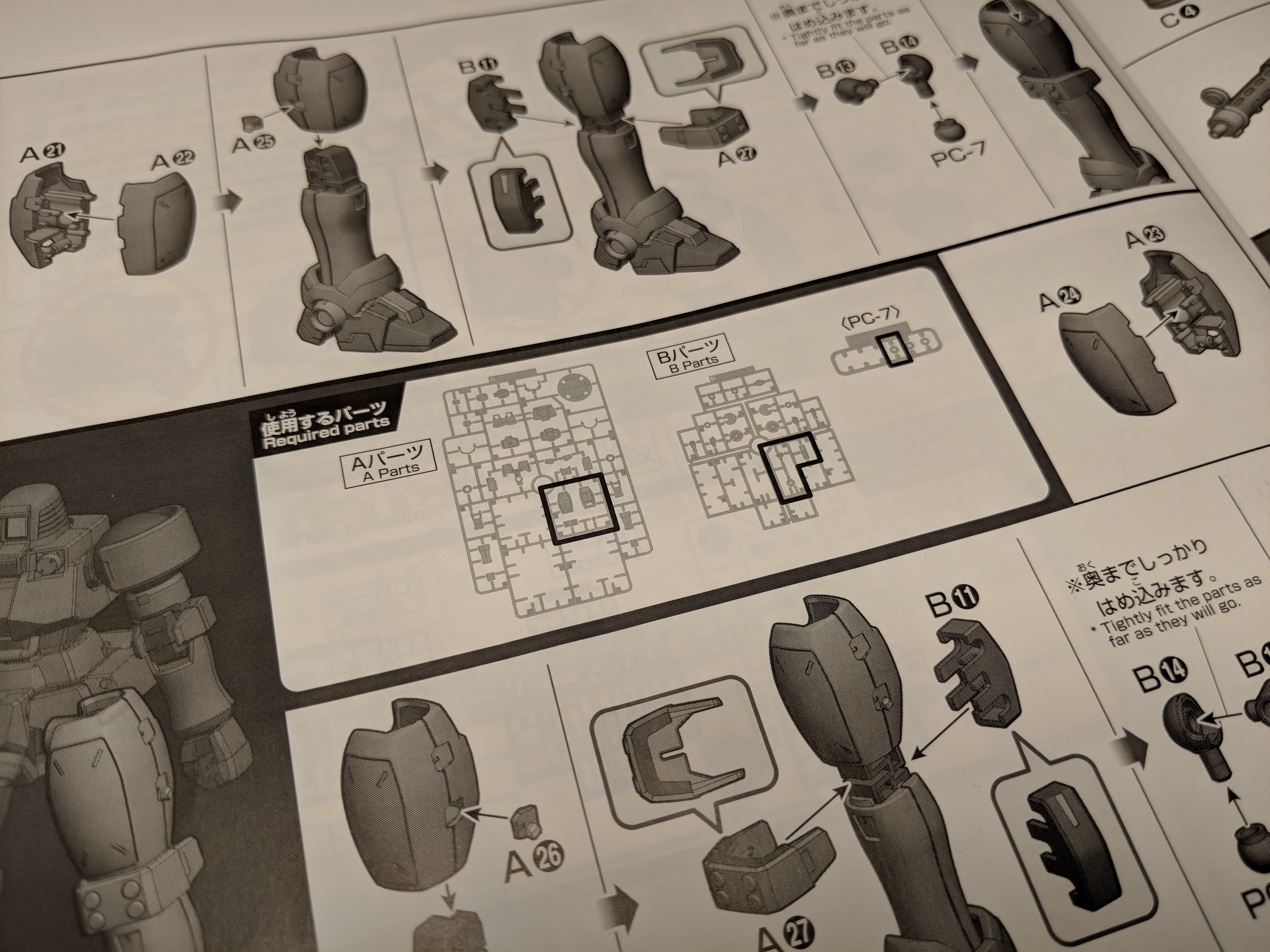 It doesn't get any more simple than this.

If that's not enough spoonfeeding for you, the parts on the runners themselves are organized by body part, so all of the pieces you need for the left arm, right leg, etc. are located close to each other. AND, the steps are all English translated. It's the most well thought out instructions manual I've ever seen for a gunpla model. 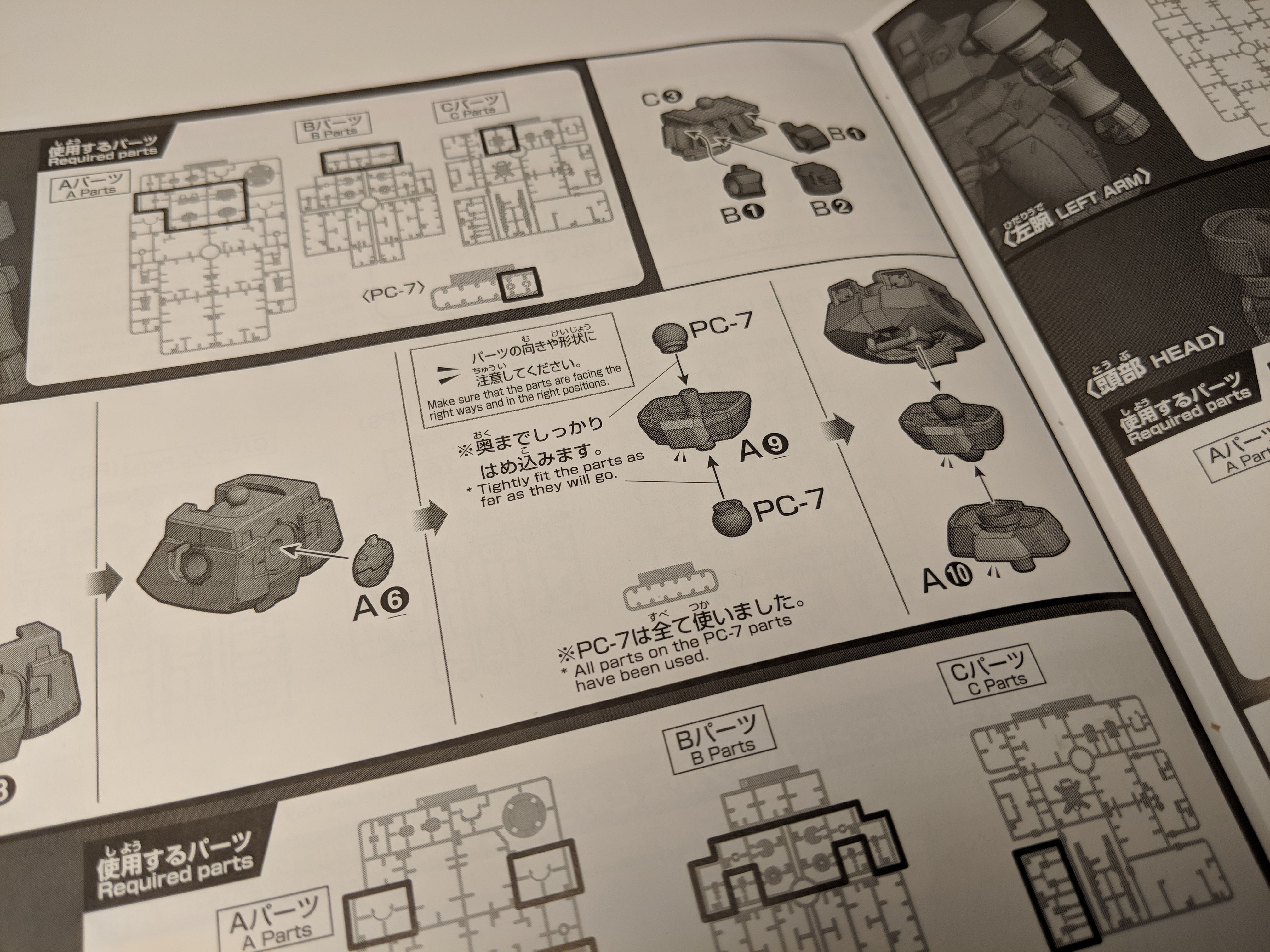 Even with the small amount of parts and a complete lack of an inner frame, the articulation isn't half bad. The arms have a decent range of motion, being able to cross in front of the chest and move up and down thanks to a pretty mobile ball joint. 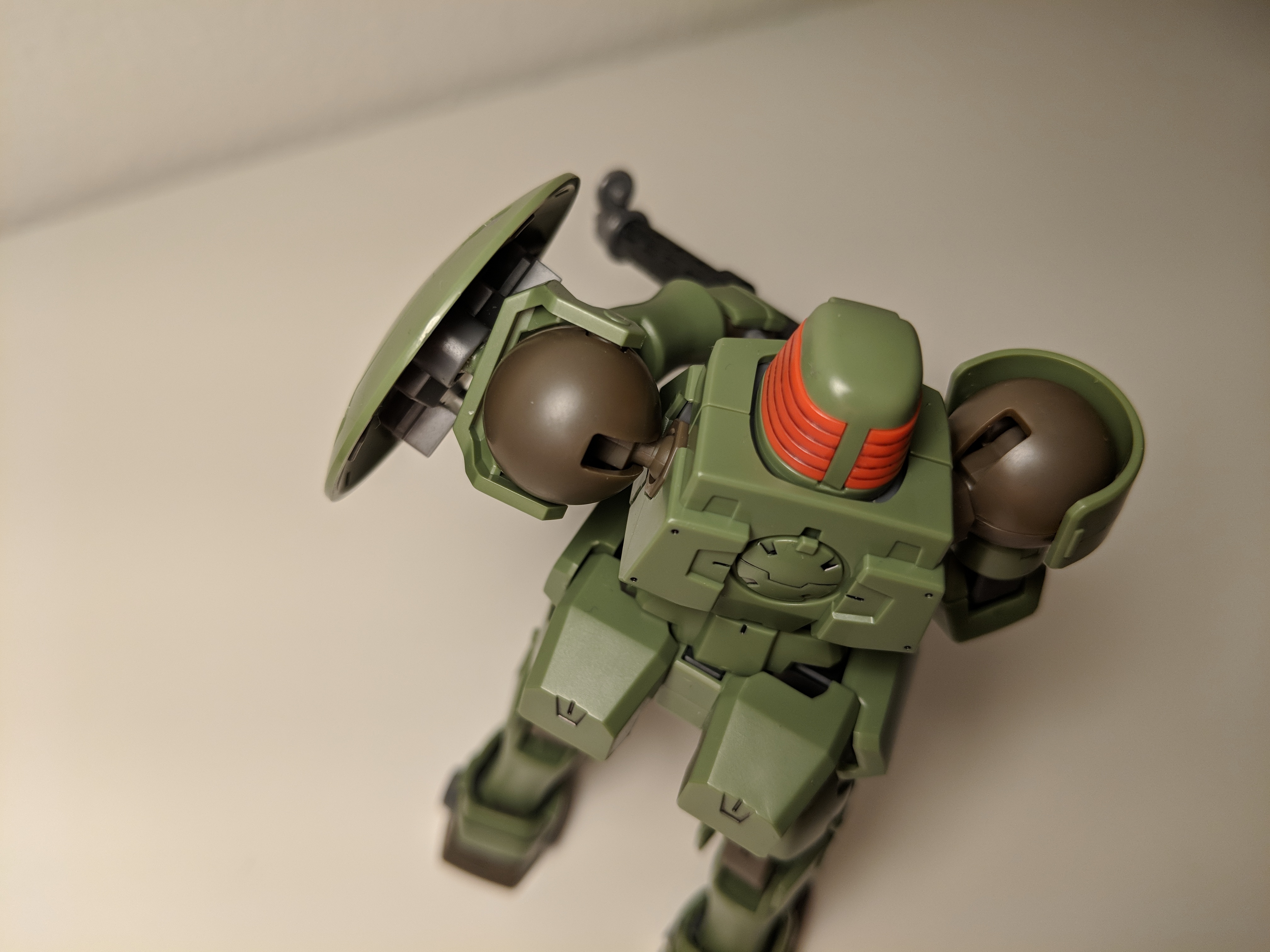 Ball joint for a ball shoulder

The legs also have a nice range of movement due to a double-bend at the knee and twistable hips. Plus, the feet are large and stable enough to keep the model from falling over while attempting some dynamic poses. The thighs, however, are blocked by the thrusters on the back of his abdomen, preventing them from moving a significant amount. 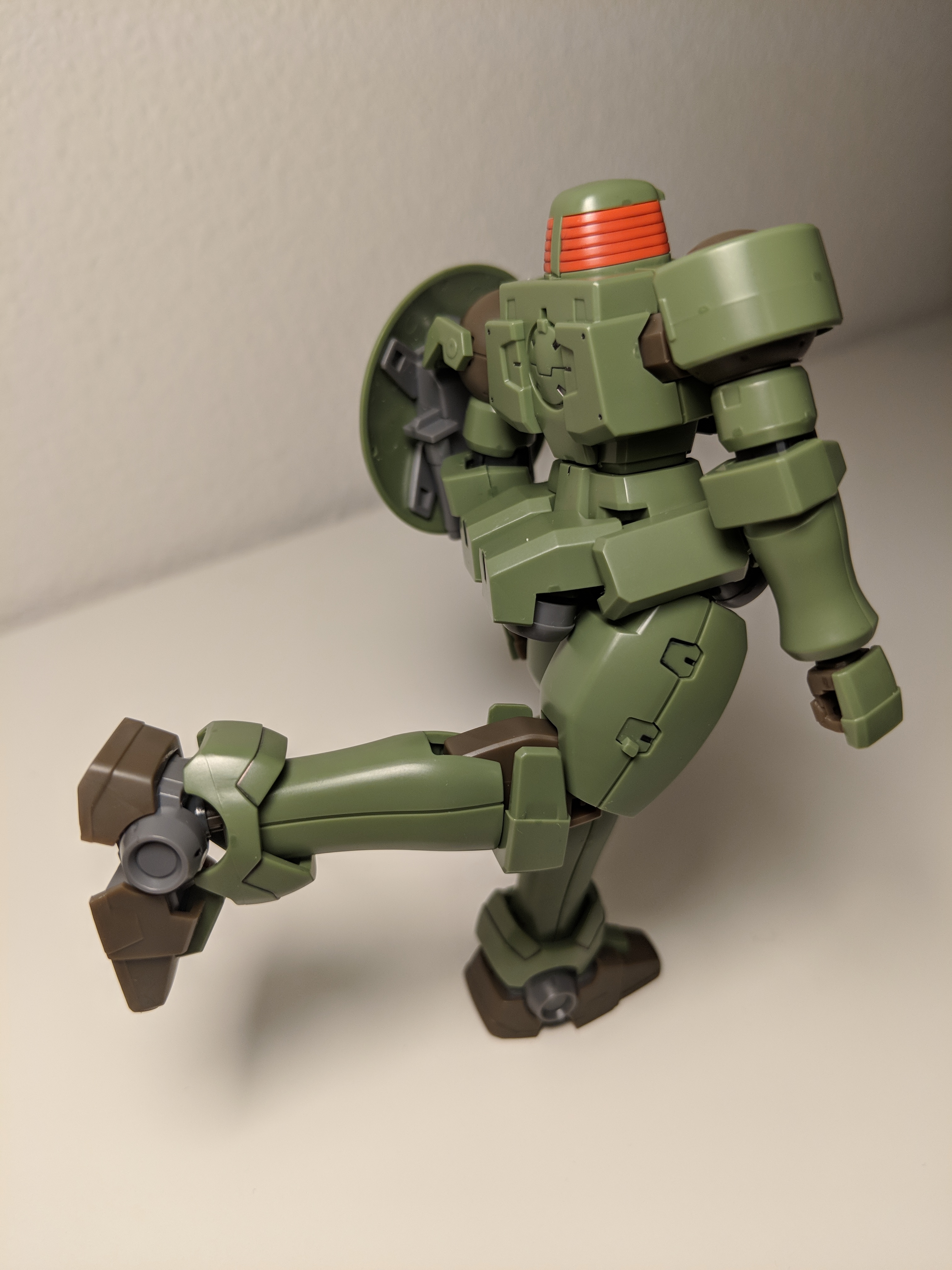 The worst part, however, is the complete lack of head movement. The head is sunk into his chest, so there's no possible way to move it side-to-side without fashioning some sort of makeshift neck. 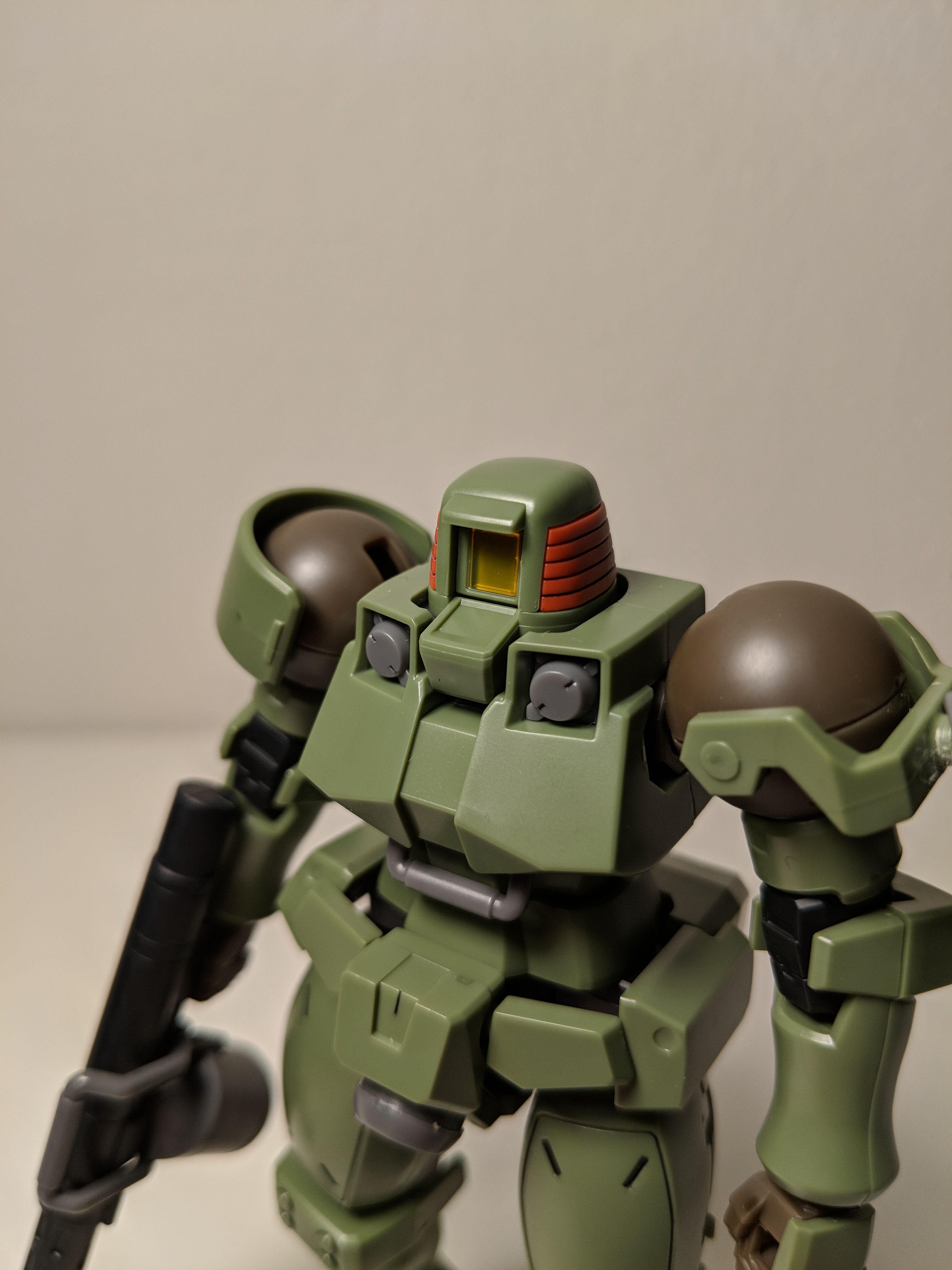 he ain't got no gotdam neck

In terms of size, he smol. Really smol. He's definitely in line with the other 1/144 Gundam Wing models, but that still means he's shorter than kits from different series. 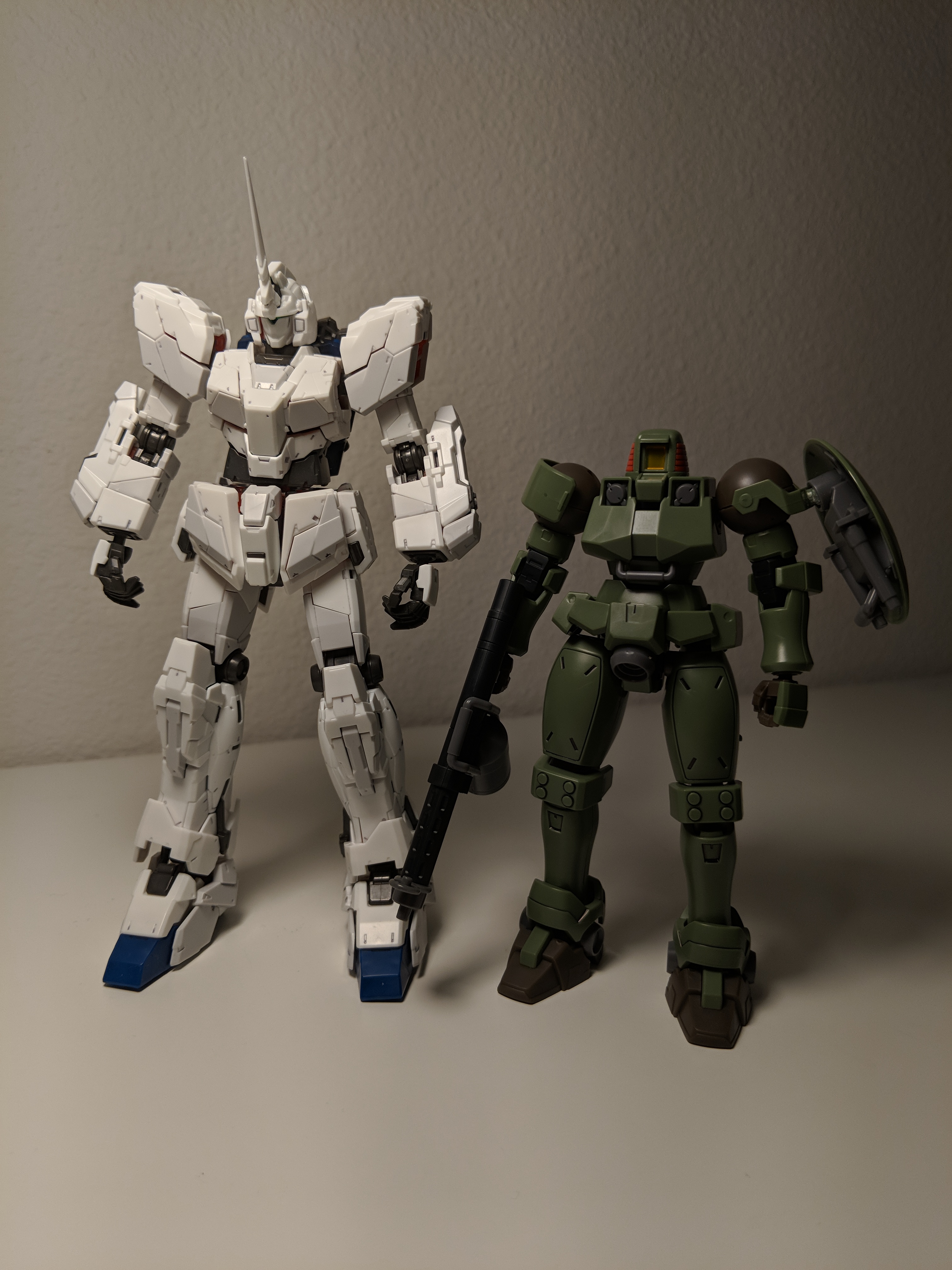 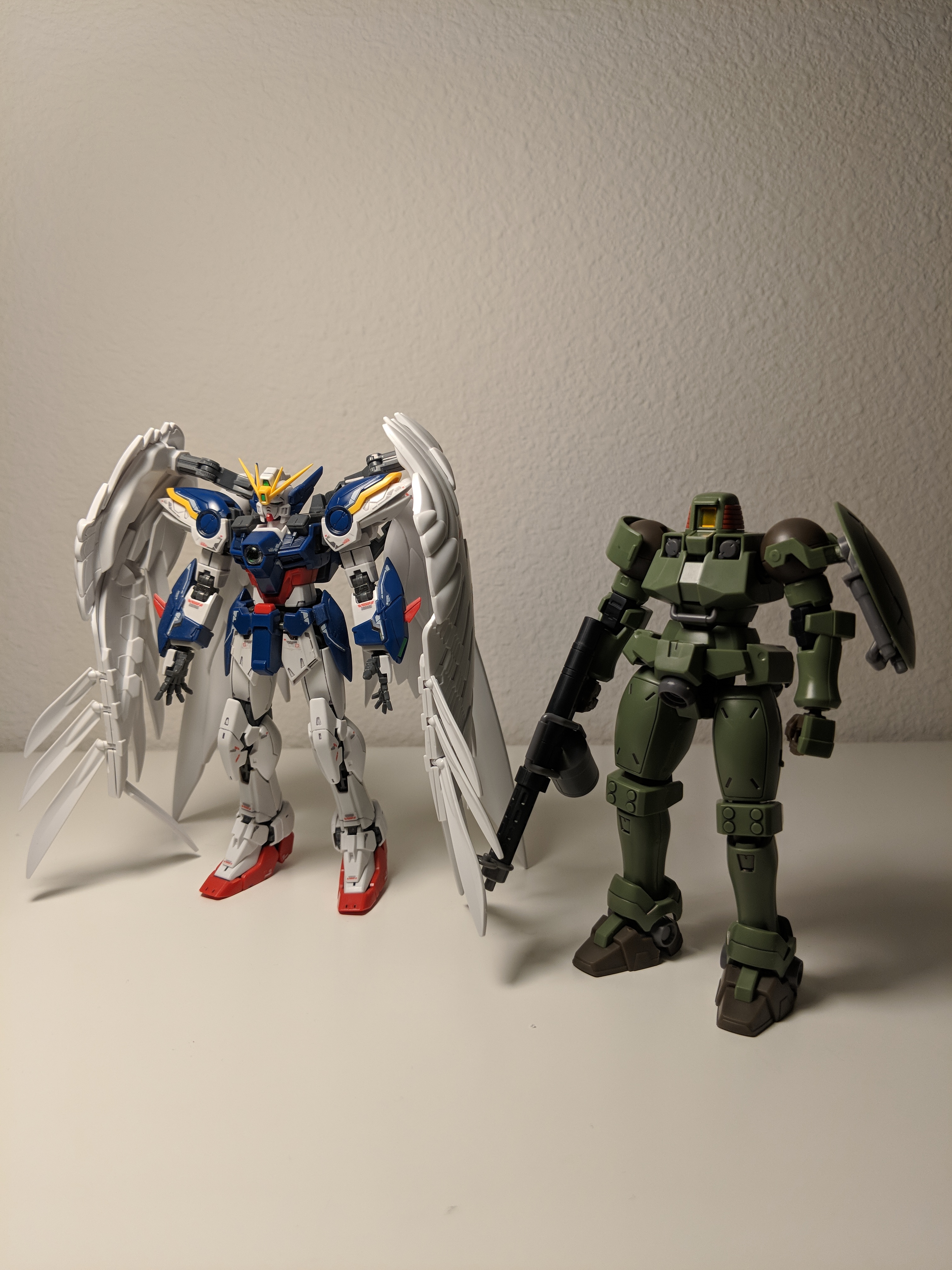 The wings make for good stabilizers

But for the very cheap price of 1000 yen (10 burger bucks), you can have your very own tiny grunt unit that's perfect for getting started with model building.

Verdict: Perfect if you're looking for a cheap, quick, and easy build. 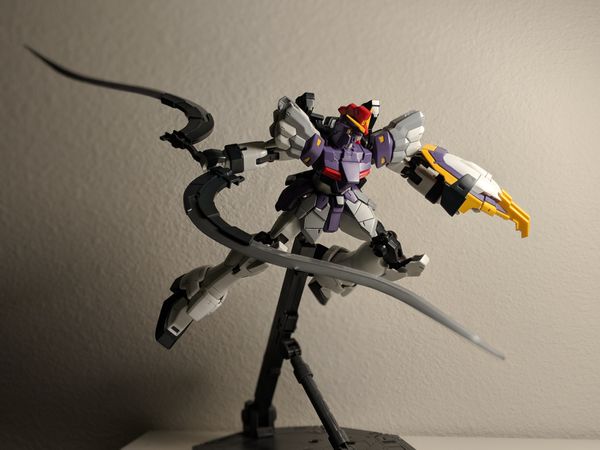